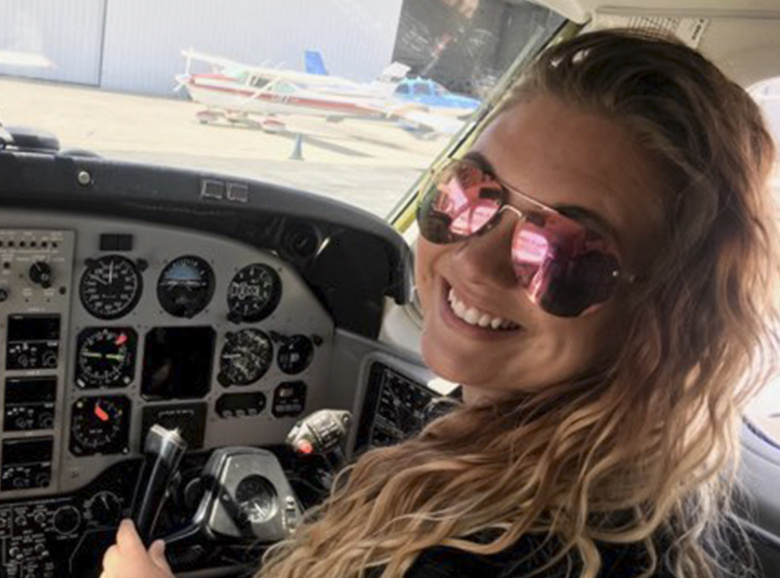 THE PILOTS LIFE FOR ME

Hello, everyone! My name is Hayley & this is my journey through aviation (so far!).

My story is a little different than most pilots out there that have known they wanted to be a pilot all along. I have wanted to be a dentist all my life, and even went to college out-of-state to get a B.S. in Biology. After feeling like I was not moving forward, I decided to come back home and try the whole aviation thing. When I got back, I had taken about 2 weeks to test out the sky where I built my first 10 or so hours. I had flown in small planes a handful of times with my father and grandfather (fun fact: I’m a 3rd generation pilot!), and ended up loving it. Next thing I knew, I was packing up all my stuff, driving across the country, and moving back to California! That is when the adventure really began.

When it really sank in that I was about to start training to become a pilot, I definitely freaked out a little bit. All I have ever known was science, which was not an easy switch for my brain between the two completely different subjects – but it looks like my time in physics class came in handy! After about a month and a half of training anywhere from 3-4 times a week, I was finally ready to solo. On my solo day, I was pretty nervous. Before I knew it, I was getting cleared for takeoff and rotating off the runway. After my first landing, and getting onto the taxi way, I finally exhaled, not realizing that I was holding my breath for so long. As I am puttin’ along the taxi way, I look towards the tower on my right, and see about 8 people watching me! That only brought my nerves back. I will not lie, my first landing was probably the best out of the 3 I had to do, but that’s life.

After continuing training, three flight instructors later, the flu, and one failed oral – I finally became a Private Pilot in January of 2018 after five months of training. I am beyond grateful for each of my flight instructors that I have taught me. I would not have been able to get through my checkride without their will to not give up on me. I am now working on my Instrument Rating & my Commercial after that!

Not too long after I got my PPL, 13 days to be exact.. I got to go on one of the best flying experiences I have ever had! I was offered to help fly a brand new Seminole back from Florida. That means that I was able to log 17 hours of multi-engine time and I could not have been happier. It took my instructor and I two days to get the plane back. The second day, I did both landings in Arizona and back here in California. Not too many Private Pilots get to do a trip like that right after they get their certificate, so I was extremely appreciative to have been offered to go on that trip.

When I got back from the Florida trip, I began training in my Bonanza. Although I had flown the Seminole, it was nothing compared to the 240hp that was in my plane. The Bonanza had so much more kick to it and it intimidated me at first. After many inconsistent days, airport hopping at different speeds and altitudes, I finally was able to get my sign off for my high performance/complex endorsement! It was a memorable day for sure. A couple months later, I flew my father and I up to Reno for the air races. We flew up there side by side with another Bonanza and landed in Carson City.

Since then, I have flown both a Baron and most recently, a King Air! The King Air is my dream plane that I wish to fly for the US Forrest Service as a lead pilot. Every job in aviation is looking to hire whether it is as a pilot, a mechanic, air traffic controllers, etc. It is a great time to be in the industry and I highly recommend giving it a shot! I changed my entire career that I thought was ahead of me, but there is nothing like being in the air and knowing that you’re able to fly an airplane!

Studying for my Private Pilot, I used mostly text books like the Pilot Handbook, Pilots Handbook of Aeronautical Knowledge, also Sporty’s Study Buddy quite a lot for the practice tests. Now that I am training for my instrument rating, I am using the Instrument Flying Handbook (and the procedures book that comes with it), the Dauntless app on my iPad, and a few PDFs that I have obtained on Weather and Weather Services. I mostly use the Dauntless app for my practice tests and studying, but will also take a look at Sporty’s every now and then.

As for personal tips, be able to get to the point that you are comfortable and confident in what you are doing. Your instructors may have the confidence in you which is great, but you also have to have the confidence in yourself. Believing in yourself is so important. I realize no one likes to fail, but it happens in this industry. I have only met a few pilots who can say that they have never failed either a written test, their oral portion, or their practical on a checkride. Failure is not fun but it does happen, don’t let it get you down. Keep pushing forward!

Lastly, be humble about your skill. Be especially humble towards the new aviators that do not have as much knowledge on flying as you do. It really is a gift that is taught through perseverance and hard work both for students and instructors.